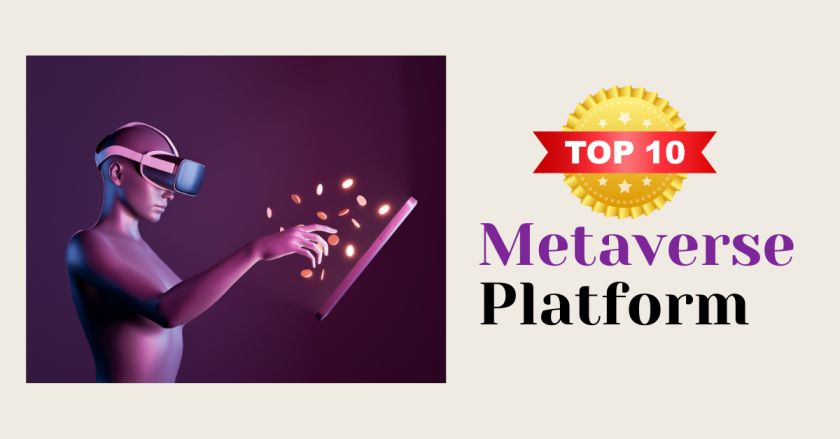 Metaverse platform will be an immersive, interconnected virtual space that allows people to communicate and share ideas. It is a 3D virtual world where you can create your own avatar and explore different environments.

The idea of metaverse was first introduced by Neal Stephenson in his novel Snow Crash in 1992. It was also featured in Ready Player One by Ernest Cline in 2011.

The first use cases of a metaverse were in the late 80s when VR was introduced. The idea of a metaverse was to create an environment that would be as realistic as possible. This would allow people to interact with each other in the virtual space, just like they do in real life.

What exactly is metaverse platform and their role in Future?

Metaverse is a digital universe that is made up of the collective virtual worlds. This digital environment can be accessed through VR devices such as Oculus Rift, HTC Vibe and Samsung Gear. The world is created by people from all around the world who are connected to each other in a virtual space. The world has its own economy, laws, and governance system and it has the potential to change how we live.

The metaverse offers social interaction with other players online which can be done through voice chat or text chat.

Players are able to create their own avatars and customize them as they see fit.

Players are able to interact with NPCs which are non-player characters controlled by AI software. There are no limits in the metaverse.

Decentraland is a virtual world, built and owned by its inhabitants. It enables user-generated content through the use of a blockchain ledger system.

It is a 3D world that runs on open source software and provides users with the power to create and share content.

Users can buy land, explore, chat with other users, or even host their own games.

The platform is decentralized, which means that there are no intermediaries between the user and the content creator.

1) Decentraland is an Ethereum-based blockchain platform that uses ERC-20 tokens(called as MANA) to power itself.

2) Users can buy land in the form of LAND parcels which are non-fungible tokens that have variable size and shape.

3) Land parcels can be leased or used as collateral for loans in the future.

5) There are no limits when it comes to how many parcels of land an individual can own in Decentraland.

Facebook’s new project, the “meta as the virtual reality,” has been a long-time coming. The company has been working on the project for a number of years and it is now finally coming to fruition.

The “metaverse” is designed to be a 3D space that will allow people to connect with each other in virtual reality. It will be a virtual world where people can visit places, meet up with friends, go shopping and even play games.

Facebook’s future seems promising as it continues to innovate and create new ways for people around the world communicate with each other.

5 features that we can expect to see from Facebook in the future:

1) Augmented reality: Facebook’s virtual reality headset Oculus Rift is expected to come out this year and it will have augmented reality features too.

2) AI: Artificial intelligence will be used to keep people engaged on the platform by recommending posts they would like based on their past behavior and interests.

3) Social Spaces:These are virtual reality spaces where you can meet up with friends who are also wearing VR headsets and exploring the environment together.

4) Creative Spaces: These are virtual reality spaces that you can create by uploading your own content. You can also invite friends to this space to collaborate on projects together, or just hang out with them in VR.

5) Avatars: avatars are the representations of you in this virtual world that you design yourself with your own personal flair. You can also choose from pre-designed avatars as well as ones designed by Facebook’s artists/designers

6) Camera Effects Platform: This provides developers with tools so they can create augmented reality effects for the camera in Facebook.

The team behind The Sandbox is working to create a decentralized gaming platform where gamers can buy and sell in-game content without any third party involvement.

The Sandbox will offer an immersive virtual reality experience, which will allow players to explore the world of Voxelus and interact with other gamers in a multiplayer environment. Players will be able to monetize their creations by selling them on the marketplace or by charging for access to their games.

The team behind The Sandbox is made up of game developers, 3D artists, entrepreneurs, and crypto enthusiasts who are passionate about creating new experiences in VR that are both fun and profitable for all participants.

1) A seamless transition between physical and digital worlds

Somnium Space is a decentralized virtual reality platform that leverages blockchain technology to connect developers of VR and AR games with a global player base. Somnium Space allows gamers to buy, sell or trade in-game items, as well as digital assets outside of the game world.

The team has been working on the project for more than two years and has developed a way to create 3D worlds in space. They have already created an interactive game, which is available for free download on their website. Somnium also provides a platform for developers with APIs and SDKs that allow them to create their own VR content.

Hyperverse is a new virtual world that provides musicians with a platform to perform. It’s an interactive, 3D environment full of dynamic animations and graphics designed to bring the music industry into the 21st century.

Hyperverse is a decentralized metaverse, where creatives and consumers of content come together. It’s a place where artists can monetize their creations and take control over them. To achieve this goal, Hyperverse has developed a set of protocols to incentivize creativity and provide an ecosystem for all types of content.

1) Provides tools for artists to create, manage and monetize their art with the goal of empowering artists.

3) Design clothing, jewelry and other items that can be sold online or in-person at virtual events

Nakamoto is a decentralized gaming platform that enables developers to create, publish, play and monetize games on the blockchain.

The platform’s goal is to provide a new way for gamers to play games without the need for centralized servers or high-end gaming hardware.

The company wants to make it easier for developers to create games and get them published in an efficient way. Nakamoto Games also plans on giving players more control over their data and privacy by storing it locally on their devices.

Star Atlas is a vast, futuristic universe with three major factions: (1) the human-governed MUD Territory, (2) the ONI Region, home to an alliance of alien races, and (3) the Ustur Sector.

You will have the chance to influence the goals of one of many factions that are in an ongoing struggle for resources, territories, and political domination happening beyond Earth. You’ll have to find creative ways to make it happen with a whole set of new assets.

It has a lot of use cases, one of them being that it can be used to teach children about astronomy and space exploration. It also provides a more immersive experience for those interested in astronomy or science fiction stories, like Star Wars.

2) Interactive map of the stars and constellations

6) Provides detailed information on the many different types of astronomical events that you can witness from your own backyard.

Metahero is a 3D scanning and modeling technology company creates immersive virtual experiences. They use high-quality scanning to create ultra-realistic 3D avatars and virtual items so people can be immersed in new worlds. It’s been used across games, VR, social media, and online fashion.

2) Metahero has an AI-driven economy which means that it will be able to respond to changes in the real world.

3) Ability to provide users with a safe environment for them to live, work, and play in.

4) It offers intrinsic economies and new sources of revenue.

5) Blockchain creates an opportunity for designers to collect royalties in advance of their assets being used.

Roblox is a virtual world and games-creating platform. The name combines the word “robots” with the word “blocks”. Roblox users can create their own worlds, design their own avatars and games on this platform.

Each user can request their own pieces of virtual real estate on which they can build houses, cars, machines, roller coasters, or anything else you can imagine with building blocks and code; these places are called “games”

2) Has the masternodes mechanism that run on the same ledger as the wallet, and they provide services in return.

4) Roblox Suite is a cross-platform tool that can be used to create new games, share your existing games with friends or explore the game worlds of other players.

Stageverse is a new way for friends to interact with each other, creating shared experiences and memories to last a lifetime. It is an ever-expanding world of beautifully designed 3D venues where people from all over the world can connect, grow, have fun and share culture.

The future of the stagverse metaverse will depend on how people use it in the future. If people continue to use it for socializing then it will become more popular than if they use it for gaming purposes only.

1) A decentralized virtual world where players can explore and create their own unique content.

2) A social media platform where people can share their creations and experiences with other players.

3) Provides a marketplace for players to buy, sell, and trade items with one another.

4) Allows users to host their own games, competitions, events, or auctions in the game world.

5) Provides an asset exchange for trading virtual goods outside of the game world.

In conclusion, the metaverse platform is a revolutionary idea that has the potential to change how we interact with technology.

This is the future of Internet.

Can Crypto Trading Be a Full Time Job? Doubts Discussed

WazirX vs CoinDCX: Best of the Best explained(2022)

The Ultimate Guide to Day and Long-Term Crypto Trading